Entertainment
Trudeau called on the Security Council to take "decisive action" against North Korea following Sunday s report of a nuclear detonation by Pyongyang — the latest in a summer of provocations on the Korean Peninsula.

However, Canada has not supported a broader effort by the full UN General Assembly to create a treaty that would outlaw nuclear weapons, a document that opens for signing when world leaders meet in New York later this month.

More than 120 countries support the treaty, and with Canada seeking a temporary seat on the UN Security Council in 2019, two international anti-nuclear groups say Canada s stance could hurt its ability to win a seat.

Countries vying for a seat on the UN s most powerful body need the support of at least 128 countries in the General Assembly.

The treaty has no support among the countries that actually have nuclear weapons, including the United States, and their military allies, including NATO and Canada.

"While we ve seen a lot of nice words come out of the Trudeau government, policies haven t really followed — not on nuclear weapons, and not on other weapons issues that Canada has traditionally led on," Beatrice Fihn, the head of the International Campaign to Abolish Nuclear Weapons, said Tuesday from Geneva.

Having a strong position on disarmament that is distinct from the five permanent members of the Security Council — all of which have nuclear weapons — can play an important role in campaigning for a temporary two-year seat on the body, she said.

"Having a solid reputation as a not-a-puppet-of-the-U.S. is obviously going to be something to your advantage in a Security Council campaign." 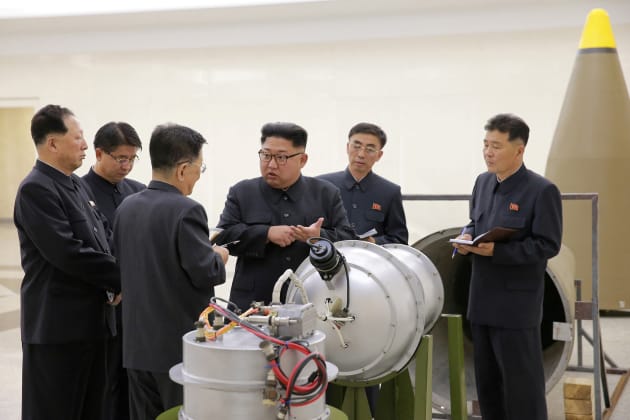 The Trudeau government is in the same tight spot as all of its fellow non-nuclear NATO countries: nuclear weapons are at the core of the alliance s defence policy, said Alyn Ware, the founder of Parliamentarians for Nuclear Non-Proliferation and Disarmament.

If Canada supported the Treaty on the Prohibition of Nuclear Weapons, it would undermine NATO s strategic doctrine and place Canada at odds with the alliance, said Ware, whose group is based in Hamburg, Germany.

NATO solidarity could have consequences in a future Security Council vote, Ware said in an interview Tuesday.

Adam Austen, a spokesman for Foreign Affairs Minister Chrystia Freeland, said Canada supports "concrete" and "meaningful" steps towards disarmament. He cited Canada s push to revive the Fissile Material Cut-off Treaty, which would be designed to rid the world of the key bomb-making ingredients.

I don t think Canada belongs on the Security Council unless it wants to do the right thing by signing the treaty.

Fihn, Ware and others say Canada needs to do more, including working within the NATO alliance to soften its nuclear policy.

"I don t think Canada belongs on the Security Council unless it wants to do the right thing by signing the treaty," said Metta Spencer, a Canadian disarmament advocate and editor of the quarterly Peace magazine.

"Canada could sign the treaty, but with a statement that we re staying inside NATO and we re working to get NATO to change its policy."

Douglas Roche, a former Canadian senator and disarmament ambassador, said Canada s highest foreign policy goal should be to sign the treaty and push for NATO to rid itself of nuclear weapons.

globalnews.ca - 05 Sep 2017 at 18:44
Increasingly defiant, North Korea has taken a huge step in its race to acquire the ultimate weapon. And as Eric Sorensen reports, the prospect of a fast approaching nuclear strike...

Globe and Mail - 26 Oct 2017 at 12:48
An 85 year old Canadian woman who survived the atomic bombing of Hiroshima will be in Oslo later this year to jointly accept the Nobel Peace Prize on behalf of this year...

globalnews.ca - 20 Sep 2017 at 13:11
UNITED NATIONS — Nations on Wednesday began signing the first treaty to ban nuclear weapons, a pact backed by over 100 countries but spurned by those with nuclear arms. The...

Art students’ creations refresh our perspective, even when only viewed online

‘Hamilton’ review: You say you want a revolution

Hamilton : What to know about the musical streaming on Disney+ - Fox Business

Saroj Khan, Choreographer Who Made Bollywood Sparkle, Dies at 71 - The New York Times

The Fast & Furious art of the car chase

The story of how ‘Hamilton’ ended up on Disney+, and how to watch today - 9to5Mac

‘Jaws’ is still devouring us. SOS!