Entertainment
Ashton has unveiled a suite of policy proposals to reform a criminal justice system that she says upholds "the oppression of radicalized communities," and fosters Islamophobia, anti-black racism, and violence against Indigenous peoples.

Calls for changes in policing

But some members of the policing community appear to be taking exception to her approach.

Ashton s platform pledges an NDP government under her leadership would as well as provincial and territorial police services.

Ashton calls carding a racially motivated practice that does not improve public safety. She s promising to remove RCMP access to carding databases and put an end to street checks.

Our movement demands racial justice. Are you with us? #buildingamovement#ndpldrpic.twitter.com/zm7To8wxWj

Another NDP leadership contender, Ontario MPP Jagmeet Singh, has similarly called for a ban on federal racial profiling and

Ashton s platform has other a number of other proposals involving police, including:

She also wants to revise the mandate of the inquiry into missing and murdered Indigenous women to investigate misconduct by federal, provincial and municipal forces. However, the final report from the inquiry is expected in the fall of 2018, about a year before the next federal election.

Ashton added that many Canadians, "particularly those who are not racialized or Indigenous, have become sensitized to this reality."

Some leaders of police associations have objected to Ashton s use of the term "forces," saying they prefer to be called "services."

Just one of the many things that are not representative of policing in Canada in the 21st century in her very offensive document/statement https://t.co/vEaowdfNrj

Tom Stamatakis, president of the Canadian Police Association, told HuffPost that as the voice of 60,000 police personnel, he would have liked the opportunity to provide Ashton the "frontline policing context" for the issues she raised. He also cautioned against painting all police officers with "the same sort of brush."

"We have police officers working communities right across this country that are doing fabulous work every day and building strong relationships with all kinds of people that live in those communities," Stamatakis said.

He agreed, however, that it is critical that all police services are held accountable to ensure they are delivering "the kind of policing the community expects.

"There s no disagreement around that."

Ashton said she is happy to see a "vivid discussion" of her platform and is not concerned it could be seen as anti-police. 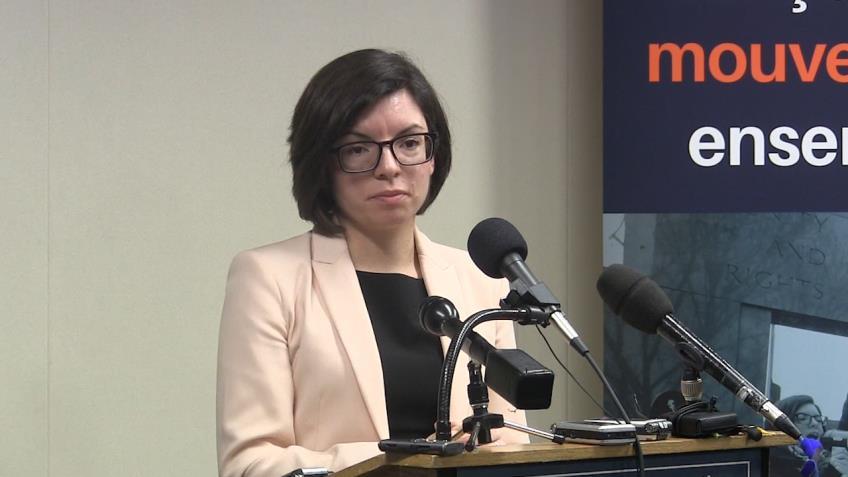 "I do know people in policing who are keen to move forward and do a better job when it comes to working with Indigenous and racialized communities," she said. "And I would hope that folks... see the need to better."

"They re continuing to engage in surveillance and I would say fear-mongering with C-51, so it certainly takes away from a genuine sense that they may want to work with communities to make things better."

Ashton also wants to completely scrap Canada s "no-fly list," which she says discriminates against Canadians based on secretive information. Singh recently announced he would remove children from the list.

If we re going to build a society that is better off, one that is free of discrimination, then we need a comprehensive approach and a bold approach.

"We re way past the 9/11 world and it s clear that much of what government continues to do, certainly in the emergence of C-51, is to continue to marginalize and target Indigenous and racialized communities," she said.

She is pledging to investigate racial profiling at the Canada-U.S. border, that governs how asylum claims are made at the border, and immediately extend citizenship to all migrant and temporary foreign workers.

Ashton says that while Prime Minister Justin Trudeau likes to talk about his "inclusive government," he has carried over "divisive" policies from the Conservative era.

"If we re going to build a society that is better off, one that is free of discrimination, then we need a comprehensive approach and a bold approach."

Jagmeet Singh Wants To Outlaw Racial Profiling. Here s How He Can Start

The Huffington Post - 21 Jul 2017 at 10:39
But is that realistically possible Can racial profiling be legally defined and outlawed While eliminating all forms of racism in our society certainly is no simple task and far...

The Huffington Post - 25 Aug 2017 at 19:03
, the Manitoba MP said in a string of tweets to individuals who criticized her stated willingness to allow Quebec to legislate against religious rights. I will not compromise on...

UN Asks Canada How It Makes Up For U.S. Immigration ‘Shortcomings’

The Huffington Post - 14 Aug 2017 at 20:27
The UN Committee on the Elimination of Racial Discrimination CERD that covered topics from violence against Indigenous women to the fact that minority people are disproportionately represented in the...

The Huffington Post - 10 Feb 2018 at 21:56
They re not sweeping us under the carpet. Enough killing our people. We fight back. Go to hell, Gerald Stanley. That s where you belong, Boushie s mother, Debbie...

Toronto Star - 05 Apr 2018 at 15:28
HALIFAX—Federal NDP Leader Jagmeet Singh is renewing his call for a ban on all random police street checks, saying the practice — sometimes known as carding — is a form...

From presidents to faded stars, all welcomed by Larry King

Love stories prove Toronto is anything but dull

RHOC : Kelly Dodd Breaks Silence on Why She Yells I m Black at the Season 15 Reunion - Showbiz Cheat Sheet